The video game Black Widow does not come from Marvel and does not have Natasha Romanoff. In fact, it presents a completely different woman, a true and a convicted murderer named Luisa Collins who went down in history as she was the last woman to be executed by death in the state of New South Wales. If the fact that it is a game about a real historical personality does not give you chills, let's review the pages of the story a bit and also take a look at this game from the Flux studio.

Louisa Collins was born in 1847, in New South Wales, and she was an Australian prisoner. Nicknamed "Borgia of Botany," she was convicted of murdering her two husbands Charles Andrews (murdered at 52) ​​and Michael Collins (murdered at 26). The turbulent marriages and the relationships Louisa had with these two men led to both of them dying from the same symptoms, a year apart. It was later determined that Louisa used arsenic to poison her two husbands. She was sentenced to death by hanging and executed on January 8 1889, in Darlinghurst prison, becoming the last woman in New South Wales to be executed in history.

The video game Black Widow was developed and published by Flux. The man credited with creating this concept is Richard Fox, who describes its creation as a game that gives the player an unwavering look at the trial, sentencing and execution of Louisa Collins, the last woman to spend time in the state of New south Wales. Mr. Fox also said this to potential players:

“With The Black Widow, I wanted to explore unlimited options in the characters' conversation about the preset options for a more imaginative role play, a complex narrative and the development of character. As an experienced historical narrator, I am always looking for new ways to interact with characters from the story. The Black Widow distills ideas that I have learned so far in an instantly recognizable format that challenges players to evaluate the facts of the case for themselves. "

The game is currently available at:

Then, the video game The Black Widow recreates all the familiar details of the original court case, taken of historical records and real letters, but brings them to a present, real-time situation. Players must review all conversations and information, and reevaluate the court case completely, giving their own verdict, that is, a trial. Players can even communicate with Louisa through the "spirit board," which is a large part of the gameplay and a tribute to the old Ouija board game of 1890, a year after Louisa was executed. 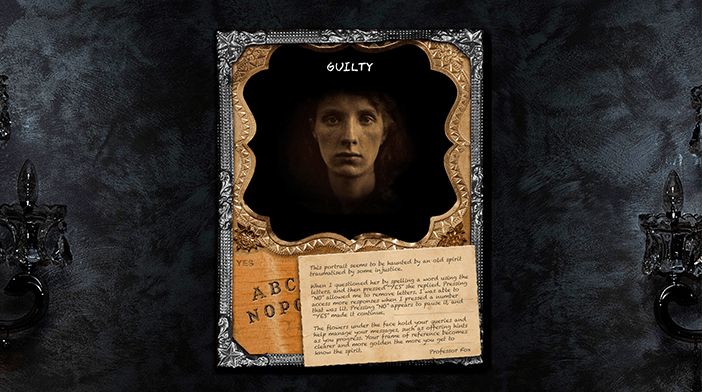 Details like this and others The factors make the atmospheric presentation of this game excellent. This game really challenges players to reassess their own powers of deduction, observation and prejudice. The officially available information about Louisa, who is on the web and in this game, presents her as the villain, with records that she is an adulteress, a drunk, a liar and a murderer. However, a case of becoming a victim of inappropriate behavior, domestic violence and misogyny can also arise from the facts.

The key features and high points of the Black Widow's experience are as follows:

The video game Black Widow is a true jewel in a sea of ​​mediocrity , in terms of new ideas and presentation. The creator of the game, Richard Fox, has extensive real experience in the investigation and presentation of historical facts through dramatic narratives, and with this game, he wanted to take the player to that exact moment and moment, and it works perfectly. This game offers a chilling, vivid and extremely exciting experience.