Welcome to Epic Seven Beginners Guide. This guide is divided into 3 separate guides on the most important features and functions of Epic Seven. Everything you need to know to start well and easily in this wonderful game you'll find in the Epic Seven Beginner's Guide.

Summoning is the main meaning of acquiring heroes and artifacts in Epic Seven. There are 4 different types of Summoning: Covenant, Mystic, Moonlight and Friendship. Every day after the reboot, you get a free Invocation of Alliance that gives you the chance to get a 3-5 Star Hero or a 3-5 Star Artifact. One Covenant Summon cost 5 Covenant Bookmarks that can be obtained through various segments of the game or by purchasing (5 Covenant Bookmarks = 100 Skystones). I must say that the possibilities of obtaining a Hero or a 5-star Artifact are ridiculous and you will not be able to concentrate on obtaining a certain desired Hero because it is simply impossible. Here is the list of real possibilities: 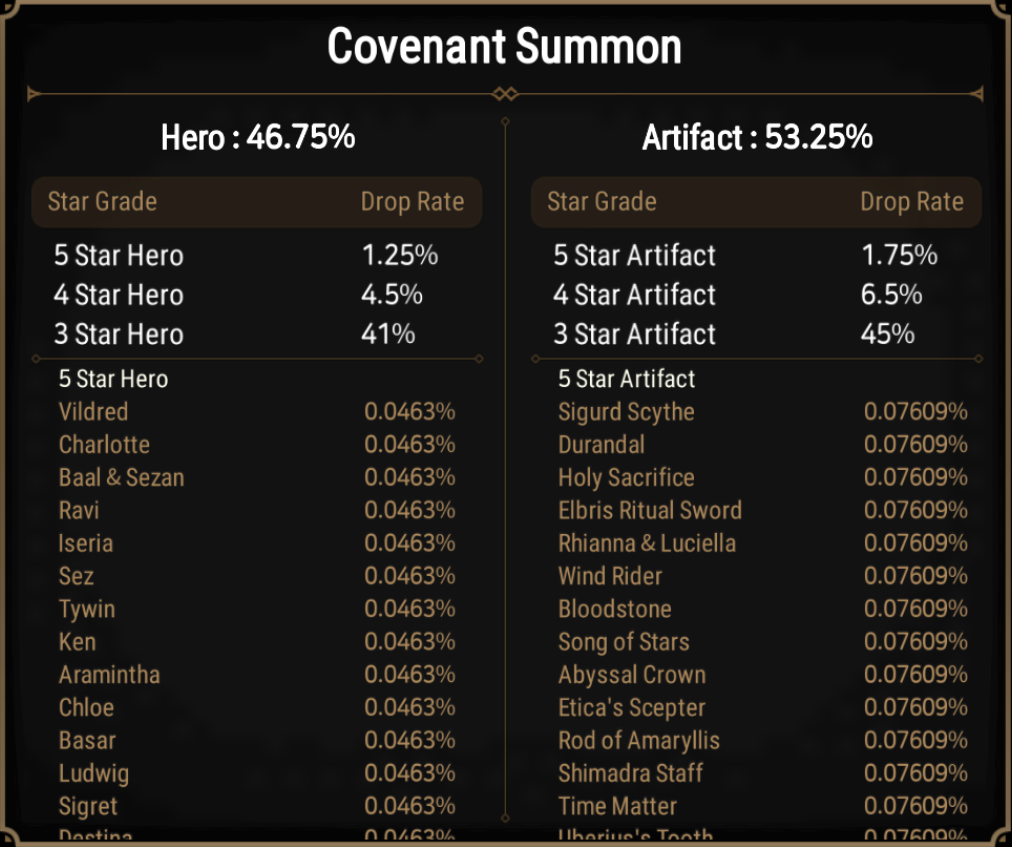 However, you should not be discouraged that you will never get a 5-Star Hero because after completing Chapter 1.10 you are granted the Selective Invocation . It is very important because that is your only way to summon a decent team of heroes for free. Selective invocation gives you a total of 30 attempts to summon up to 10 heroes and artifacts and in each attempt, you have a considerably greater chance of summoning a 5-star hero. If you are not satisfied with the results, you can try again (up to 30 times), but after confirming the invocation results, you cannot use the other invocation opportunities. In short, scroll again until you get at least one 5-star Hero and at least one 4-Star Hero and Artifact. Do not try to get two 5-star heroes because it is impossible. Selective invocation will greatly influence the course of the entire game, so be patient and try to get the best possible combination, even that means you need to create more than one account. 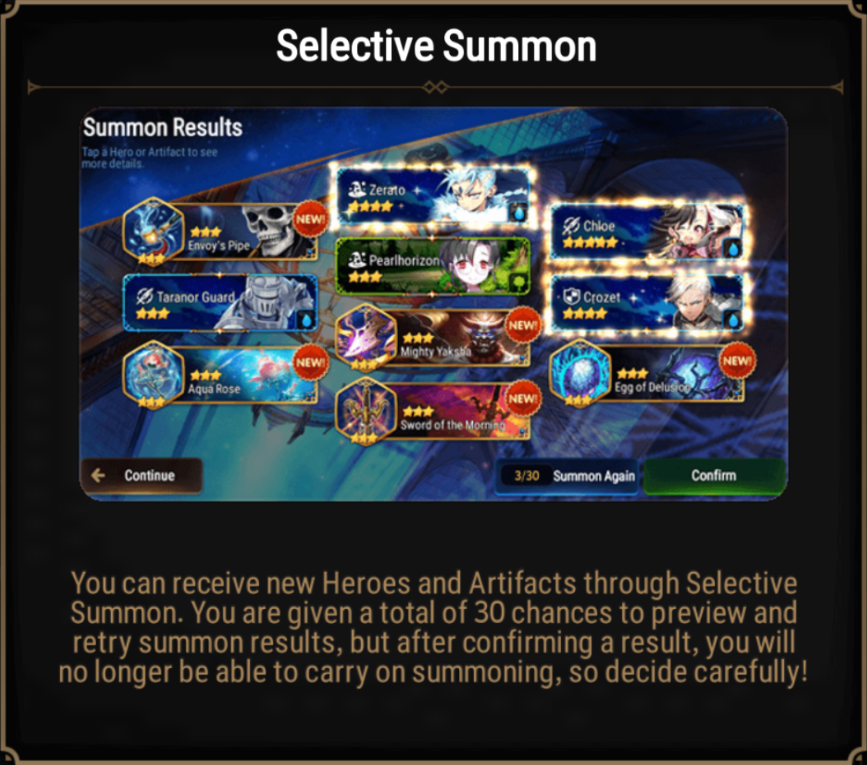 For Mystic Summon you will need 50 mystical medals that are extremely difficult to obtain but allow you to obtain heroes and artifacts of greater degree. Convocation of friendship use the available Markers of friendship when exchanging Friendship Points (Friendship Points are obtained when you use a friendly supporter in Adventure missions) and allows the invocation of 2-star creatures necessary for promotion and improvement. Moonlight Summon is available after completing Chapter 10.10 Shrieking Hall and allows you to invoke Moonlight Heroes for Galaxy Bookmarks later in the game (Moonlight Heroes is changed after each cycle of the game).

After your account reaches rank 10 in Epic 7, you can join a guild. Joining a guild should not be difficult and you should be able to find a decent open guild in a guild list. To begin, it is important to be a member of an active guild because donations and guild increases can greatly facilitate the progress of your game. On a guild screen, you can see several options: Member List, Registration, Reward for Check-in, Help, Donate, Member Store, Captains Store and Weekly Mission.

Member list brings you the list of all players in a guild where you can see their activity and learn what heroes they are using. Also, if you want to leave the guild here, you can find the right option, but keep in mind that after leaving the guild you will not be able to create a new guild or join another for a certain period of time, so you should not use this option unless it is the last solution.

The Registry gives you the basic information about total guild donations, aid, weekly missions and registrations.

Reward for registration shows the number of Brave Crests (guild currency) and gold received according to the records.

On the screen Aid you can support your guildmates by donating the resources they are demanding (Brave Crests are granted for each donation) or you can request a donation. It is better for everyone to donate, so don't be shy and ask for support, as donations will be your best solution for early awakenings.

After each daily reboot, you can Donate Gold or Proof of Value for your guild. For each donation, you will receive Brave Crests and the guild leaders will receive Honor Coins and Courage Test that can be used in Captain Shop.

Brave Crests that you won during the progress of the game can be used in Member Store In Member Shop you can buy Tera-Phantasma, MolaGora, Catalyst Chest, Lesser Artifact Charm or Labyrinth Entry Ticket. My advice is to use Brave Crests won only in Tera-Phantasms or MolaGoras because those items are necessary for the character's progression and you will never have enough of these.

Captain Shop is a place where alliance officers and the alliance leader can use resources donated from other guild members. For the honor coins, the guild leaders can buy experience, gold or health improvements for an entire guild and, as proof of courage, they can buy chests of guild supplies that randomly provide members of the Skystone guild, stigma or brave crests.

Weekly mission Screen provides you with information on the missions you must complete that week to win Brave Crests, Gold, Ancient Coins, Stigma and Guild Supply Chests for yourself and Proof of Courage and Honor Coins for Guild. These missions are not demanding and can easily be done if you are active enough.

At the end of Chapter 3.2 you can enter the Arena where you can fight against other players. At the beginning, you are placed in the worst Division: Bronze 5, but with the victory, you will earn Arena points and climb the ladder. Better divisions grants better rewards. Gathering the defense team is important because the defense team will protect your current rank, so be sure to place your strongest heroes on the defense team. 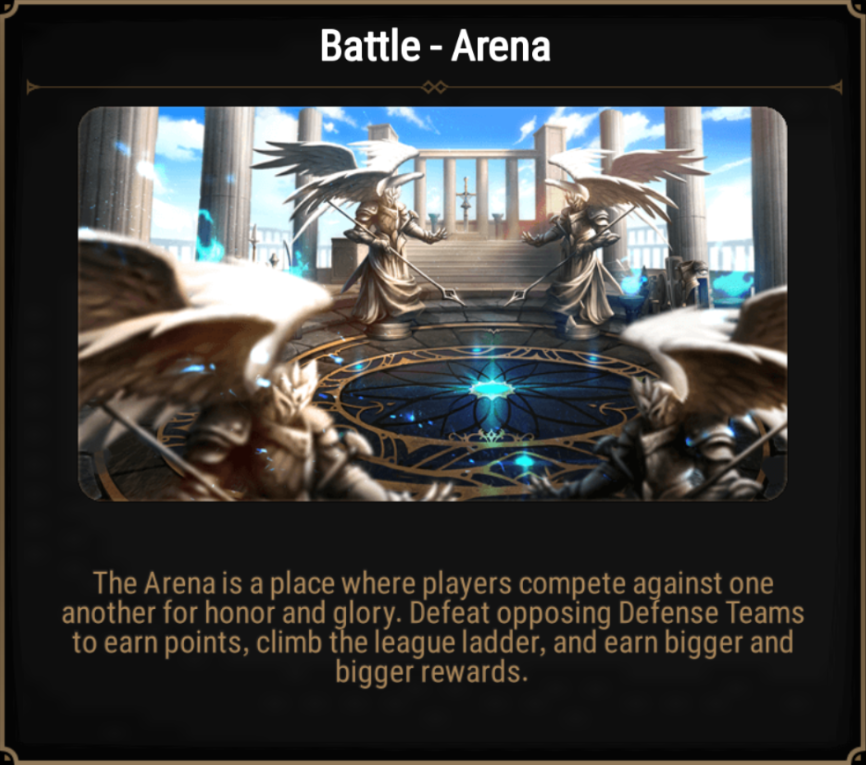 At first, you will be disappointed and you will not be able to have a serious impact on PVP because it will take a long time to maximize and gather the right equipment that can be competitive for other teams. If you want to ascend to the PVP Division, you must be persistent and not give up. As you progress through the missions on the Adventure Map, you will open NPC Arena teams that can be fought instead and that is ideal for the early Arena: you will not ascend the ladder but you will have a steady income from Skystone and Conquest Coins and You will be able to fulfill the daily missions. In fact, Arena is the final content of the Epic Seven game, which becomes your top priority only after the end of the existing PVE content and after maximizing your equipment.

The reputation screen shows your reputation with various fractions of Epic Seven. To increase your reputation and earn bonuses for each of the fractions, you must fulfill your demands by completing certain tasks or missions. There are currently 5 sections: the Diary of the Three Sisters, the Chain of Memory, the Conclave, the Merchants' Union and the Ghost CIC.

The Diary of the Three Sisters is a fraction whose bonus decreases the cost of healing and healing time for the entire body. list. To increase your reputation with the Diary of the Three Sisters, you must complete daily and weekly missions that will ask you to complete different segments of the game, feed creatures and dispatch automatic missions.

The Memory Chain fraction provides you with EXP battle and team EXP bonuses primarily to level and promote your heroes. The reputation with this fraction can also be increased by unlocking devotion skills, increasing the level of friendship of your heroes and recruiting heroes through connections.

The conclave fraction improves the rewards of friendship points and maximum energy. The reputation for the conclave is obtained by completing history missions, urgent missions, by participating in the maze and by interacting with objects in missions (treasure chests, goddess statues, etc.).

A store is a place where you can spend your resources to buy several useful things and accelerate the progress of your game. On the right side of the store screen, you will see a unique store for each available currency.

Skystone Shop gives you the opportunity to buy Skystones for real-life money and we can call it a payment -win shop.

Another paid shop to win is Pack Shop . In Pack Shop you can choose to buy different packages that can accelerate your progress in Epic Seven. You can buy hero summons, resources, equipment, amulets, creatures and even rank progress.

A Normal Shop is a place where you can spend Skystones and Leifs. For Skystones you can buy citations, gold, tickets and energy, while for Leifs you can only buy tickets for energy and tickets. I already said that the chances of invocation are ridiculous, but with each invocation you can collect some of the transit stone that is needed to get the Galaxy Markers (needed to summon rare heroes) and 4-5 Star Hero Summon tickets, so You just have to spend your Skystones in the call.

Transit Stone Shop is the store where you can exchange Gold Transit Stones and Silver Transit Stones. Gold Transit Stone is obtained after 20 invocations and you will need six to buy 5 Galaxy Bookmarks or a 4-5 Star Hero Summon ticket. Keep in mind that this is your only way to collect better heroes in Epic Seven, which means that you must exchange your transit stones as soon as possible (the invocation of Galaxy Bookmarks will be available only after you finish the main campaign on normal difficulty) . Silver Transit Stones, you can win by transmitting heroes and through various mission prizes, for buying amulets, creatures and accessories. My advice is to use Silver Transit stones only for MolaGoras and GigaPhantasmas every week (you can buy only 1 of those per week).

During your progress, you will gain many friendship points and the best ways to use it to exchange them in Friendship Shop . For Friendship Points, you can purchase Energy, Arena Tickets and Friendship Markers needed for Friendship Summoning.

The Ancient Coins are collected in Labyrinths and can be exchanged in Antique Coin Store for accessory charms and Malicious Charm necessary to enter Azmakalis on Hell difficulty. Azmakalis is available to storm after completing Chapter 5.9 Peiata Roa on World difficulty and that is the content of the final PVE game of Epic Seven, so you must keep your Old Coins until you can participate in Azmakalis in Hell because the best rewards throughout the game they are available there.

Conquest Points Shop is a PVP store where you can spend your Glory Crests and Conquest Points to buy energy, amulets, high-level PVP equipment and MolaGora seeds (once a week).

This is all you need to do now to fully understand all the options in Epic Seven. Epic Seven may seem a bit complicated for a mobile game, but you'll get used to the most important principles of the game after a day or two at the most. Get ready for a long trip because you will need months of play to achieve your goals and reach the content of the final game of Epic 7. Be persistent and patient because you will surely be rewarded at the end.

You can find detailed information about all the heroes and their value in the game in our Epic Seven Level List.

We hope you enjoyed Epic Seven Beginner's Guide and that you now fully understand all segments of the Epic Seven game. BlueMoonGame wishes you a long and prosperous journey to a wonderful world known as Epic Seven.