Welcome to Epic Seven Beginners Guide. This guide is divided into 3 separate guides on the most important features and functions of Epic Seven. Everything you need to know to have a good and easy start in this wonderful game that you will find in the Epic Seven Beginner's Guide.

The Hero button opens all available functions for heroes and creatures in your list. Those functions are Team, Hero, Skill Improvement, Specialty Change and Transmission.

The Team function opens the screen where you can organize Heroes teams in your list. By default, you can form 2 different teams, but you can buy more slot machines for gold. On this screen, you can see the position, role, level and element of the Heroes in a chosen team, Devotion Ability bonuses (each Hero has a special devotion ability that can be improved by combining 2 equal Heroes in the window Promote in the Hero function) and the list of unused heroes from your list. 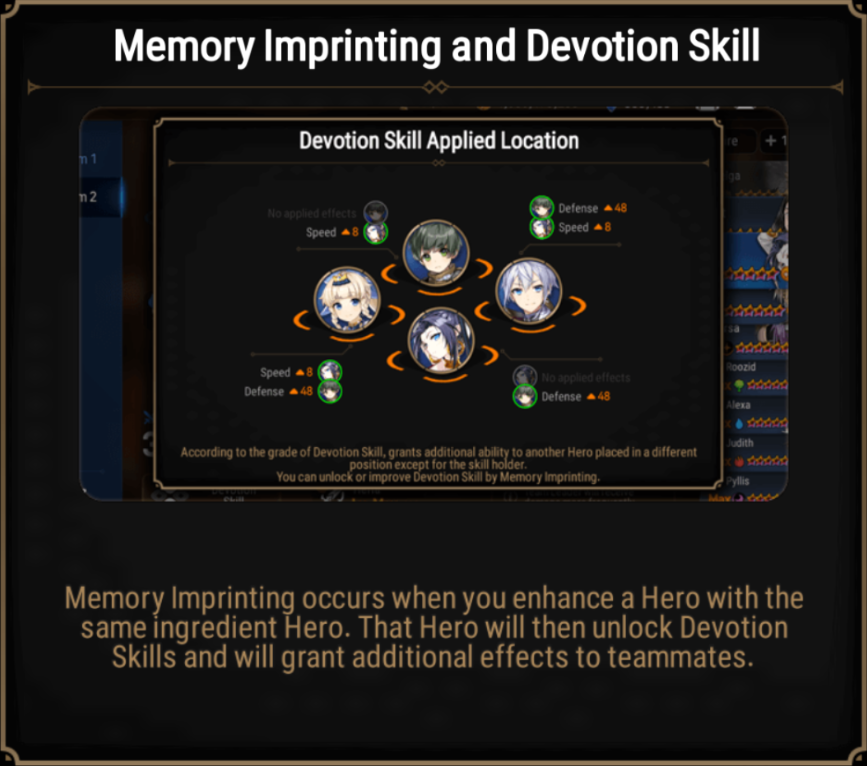 The hero function is probably the most important function of the game. On the Hero screen, you can see everything you need to know about the selected Hero and the list of other Heroes and creatures on your list. The left side of the screen shows the hero's experience, the hero's abilities and his level, the Hero's Devotion skill level and his real power (the total CP is the combined value of all statistics, abilities and equipment). In the center of the screen, there are 6 spaces for the team (Weapon, Helmet, Armor, Necklace, Ring and Boots), 1 space for an artifact (Artifacts are special items that can be won by invoking or finishing certain segments of the game. Artifacts generally improve the Hero's abilities and skills, greatly influencing the overall strength of the Hero), and 3 separate functions: Specialty, Improve / Promote and Awaken.

The specialty function provides you with information about the relationships between the selected Hero and other affiliated heroes. with him and shows you the hero's specialty, the background and the leader's statistics. Each hero has a unique specialty and a command, charm and political score. This is important for automatic missions in High Command because each mission requires certain specialties.

The Awakening feature allows you to unlock forgotten abilities and abilities of each Hero. As I said before, each hero can have up to 6 stars. For each star, you can unlock 1 skill using runes or catalysts. The price of unlocking gradually increases as the number of stars for each hero improves. Runes and catalysts can be obtained in several ways: completing Campaign Missions, completing Spiritual Altar and Abyss in the Battle Menu, by donating your guild mates and buying. Awakening Heroes is very important to reach their full potential, especially since some unlocks greatly improve Hero's abilities, but you should only wake up Heroes that you will use in PVE or PVP because you will not have enough materials to wake up all the Heroes on your list. [19659009] Epic Seven Small Sun Badge Catalyst

I already mentioned how to obtain the above catalysts, but there is a specific catalyst that many people wonder how to obtain, their Small Sun Badge catalyst. There are some ways, but you must be persistent. You can get it in area 3.7, with a much lower probability of fall, or you can grow it in 4.8, 4.9 with a higher drop rate (average energy spent is around 200-300). 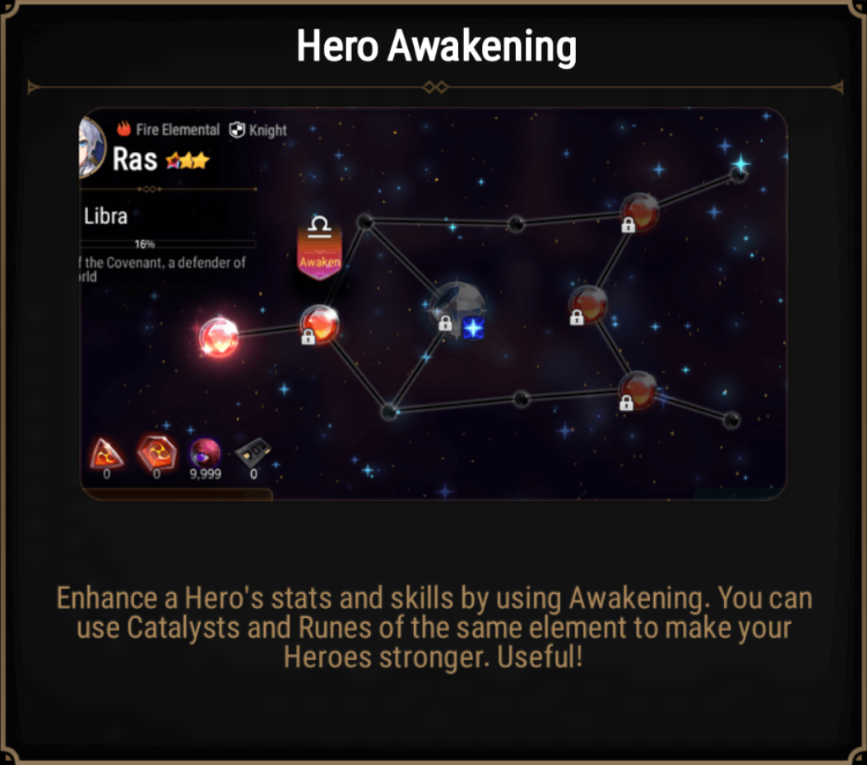 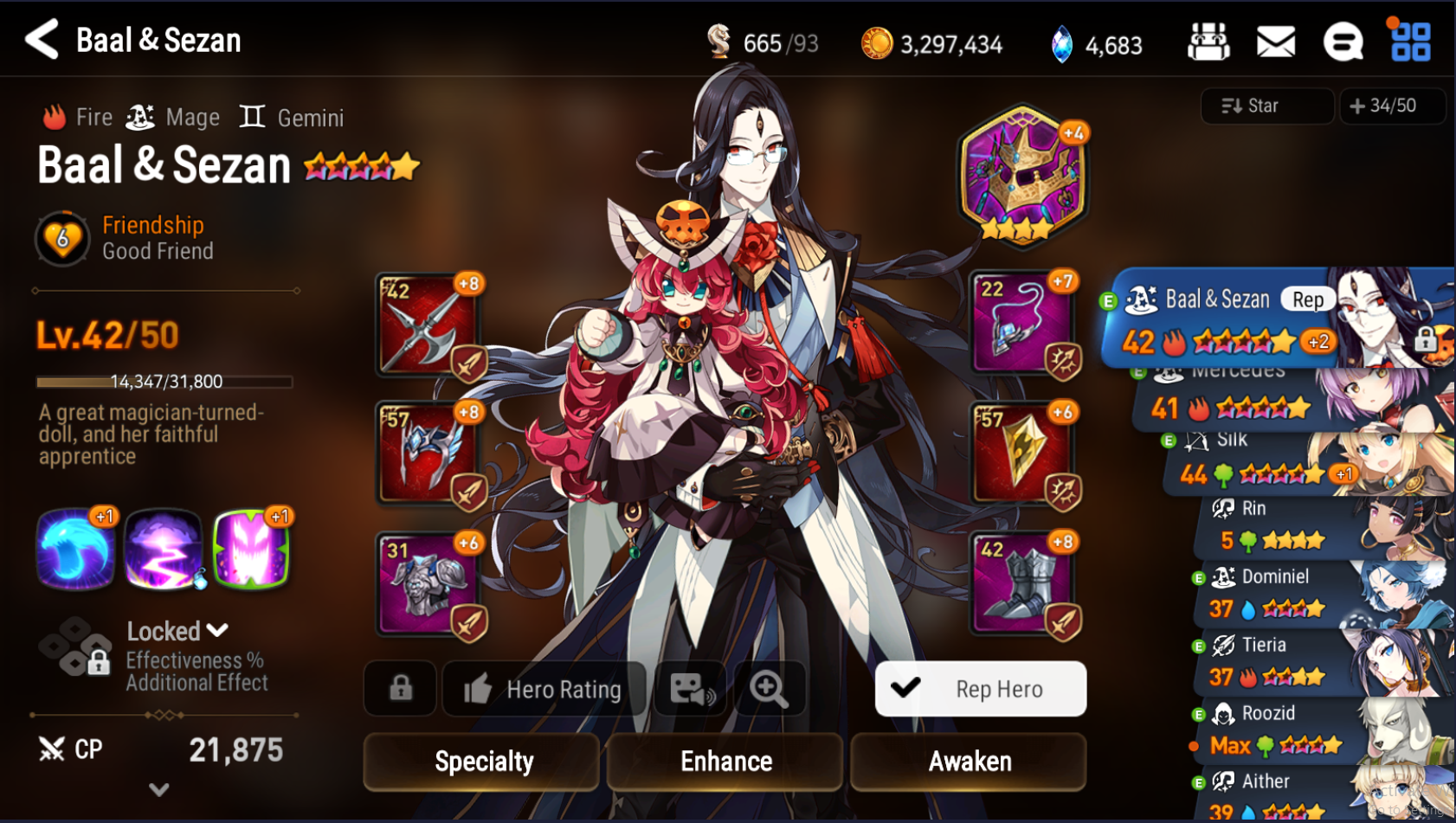 The Skill Enhancement function is another function available when you click on the hero icon. Each hero's abilities can be improved several times before reaching their full potential. When you click on Skill Enhancement, you will see the list of your Heroes on the right side and the selected Heroes abilities that can be improved in the middle. To improve skills you will need MolaGoras and certain catalysts. The price of improvement gradually increases with each level and maximizing a skill level will be a very difficult task. My advice is that you learn all the possible improvements of all the abilities for each Hero that you are really using and that you try to improve the most important ones. Skill Enhance can improve skill damage, healing, combat readiness, the percentage of effects, decrease cooling, etc., so you must decide what you need most before spending the resources you need so much .

Transmission is the last function available when you click on the Hero icon and this basically allows you to remove the selected heroes or creatures and be compensated for that action with Gold and Stones transmission.

This concludes everything you need to know about Hero's functions and now we will talk about another important function of the game:

When you click on the Battle button (bottom right of the game lobby, next to the Adventure button) you will see several icons in the form of images that take you to important segments of the game where you can use your heroes spending energy or tickets. Those segments are Side Story, Spirit Altar, Abyss, Hunt, Labyrinth and Challenge.

Side Story is similar to Adventure but here you are following unique stories for certain heroes to complete certain missions. Secondary stories are like events and appear in a certain period of time. The duration of Side Story is usually 20 days or more and during that time its objective is not only to finish all missions and missions, but also to obtain the currency originated in the story. Some of the missions can be performed at different levels of difficulty (higher difficulty – better rewards) and those missions must be performed several times to accumulate enough currency given for the exchange. The Side Story currency exchange can provide you with great rewards needed to improve your hero team. By completing Secondary Stories and accumulating enough money, you can unlock heroes affiliated with Secondary History. Those heroes usually have 5 stars and will be a great addition to your list, but you will have to invest a lot of time and energy to unlock them. 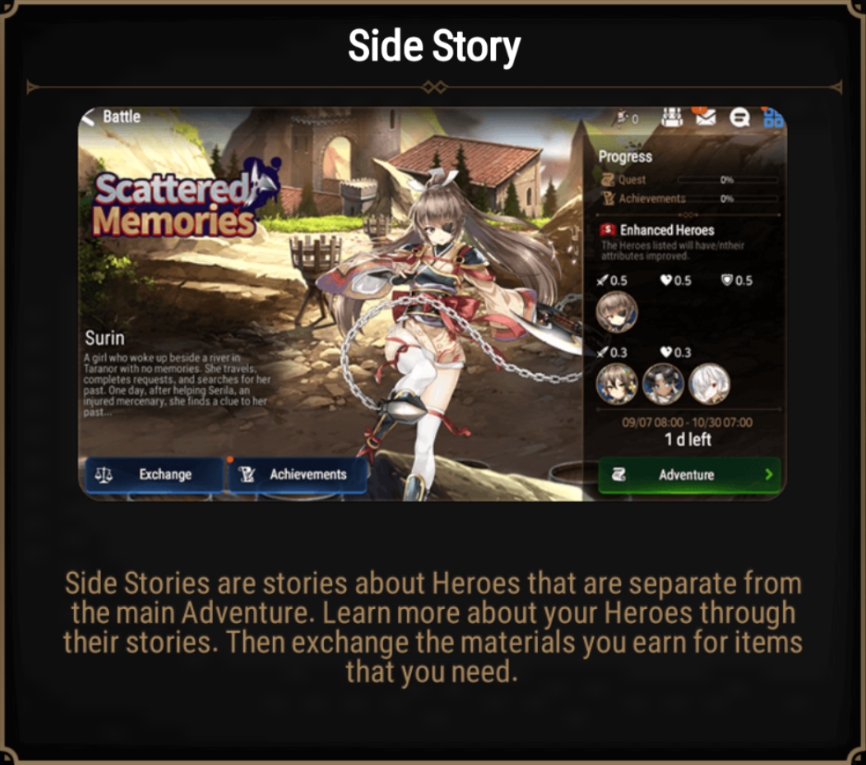 Spirit Altar is a game segment in which you can collect Runes when defeating enemies and will be available after completing Chapter 2.2. Spirit Altars are based on elements and every day you will have the opportunity to fight for different runes. For example, the altar of the Spirit of the Forest is guarded by creatures of wind elements and rewards you with runes of wind elements. Obviously, there is an Altar for each element. Spirit Altar has 10 levels of difficulty and each level gives you better opportunities to acquire runes of greater degree. Unfortunately, you can only get Runes of the Altars, so you will have to find another way to get the catalysts necessary for Awakening. To participate in the battle of the Spirit Altar you will need energy that gradually increases with the level of the Spirit Altar.

After finishing Chapter 2 Abyss you can enter through the Battle Menu. Every day you are given 3 attempts to clean the floors of the Abyss. As you descend into the Abyss, the enemies are harder but the rewards are also better. Test your limits every day to progress faster. Abyss has 90 levels with unique rewards in each level. Each level is guarded by 1 group of enemies and the Boss.

When building a Steel Workshop, the segment Hunting is available in the Battle Menu. In Hunt Dungeons you can grow ingredients to make equipment in a steel workshop. There are four different hunting dungeons (Wyvern Hunt, Golem Hunt, Banshee Hunt and Azimanak Hunt) and each dungeon has more than 10 stages, whose difficulty gradually increases providing better rewards (the higher stages provide you with not only ingredients but also epic equipment) ) As with the Spirit Altars, energy is also needed to participate in the Chase, and the amount of energy needed increases with each stage of the Chase.

After finishing the first chapter of the game Labyrinth is available in the battle Manu. There are currently 4 different mazes: "Tirel Castle at Chaos" (opens after completing chapter 1), "Great Farche Labyrinth" (opens after competing in chapter 5.9 on normal difficulty), "Nixied & # 39; s Sanctum "(opens after deleting 7.S6 Seven Flags Fortress on normal difficulty) and" Azmakalis "(opens after 5.9 Piata Roa on World difficulty). Labyrinths are basically huge maps that must be erased in several attempts to explore 100% of the labyrinth area and find the portal to the next area. The labyrinths have 5 zones and each zone gradually increases the difficulty of the enemies and the quality of the rewards. 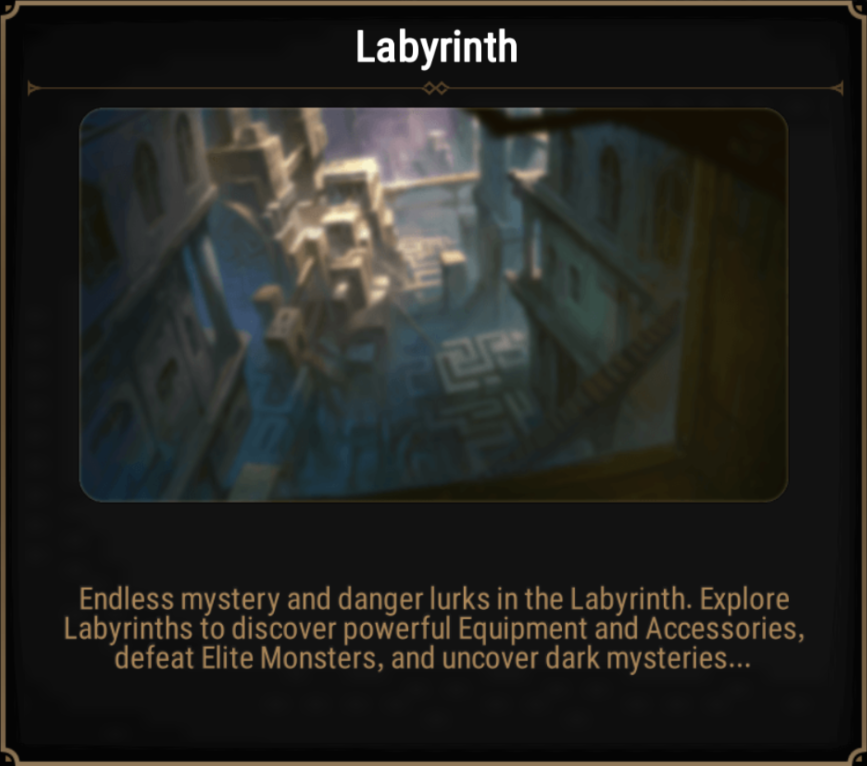 The moral of the party is the most important when entering the Labyrinth. Your team starts with the maximum morale (50) and after each move or battle, the morale slowly decreases until it reaches the minimum (-50). Once per battle, you can camp at a crossroads to rest the party and increase morale. While camping, you can share stories among your heroes in an attempt to increase your morale, but be careful as some available dialogues may decrease your morale. You must learn which options are best for your selected heroes and you can only do so by trying out all the dialogues. However, in Hero Specialty Screen you can learn which heroes have better relationships between them, which can help you decide which dialogues to choose. In the image below you can see the advantages and disadvantages of high and low morale: 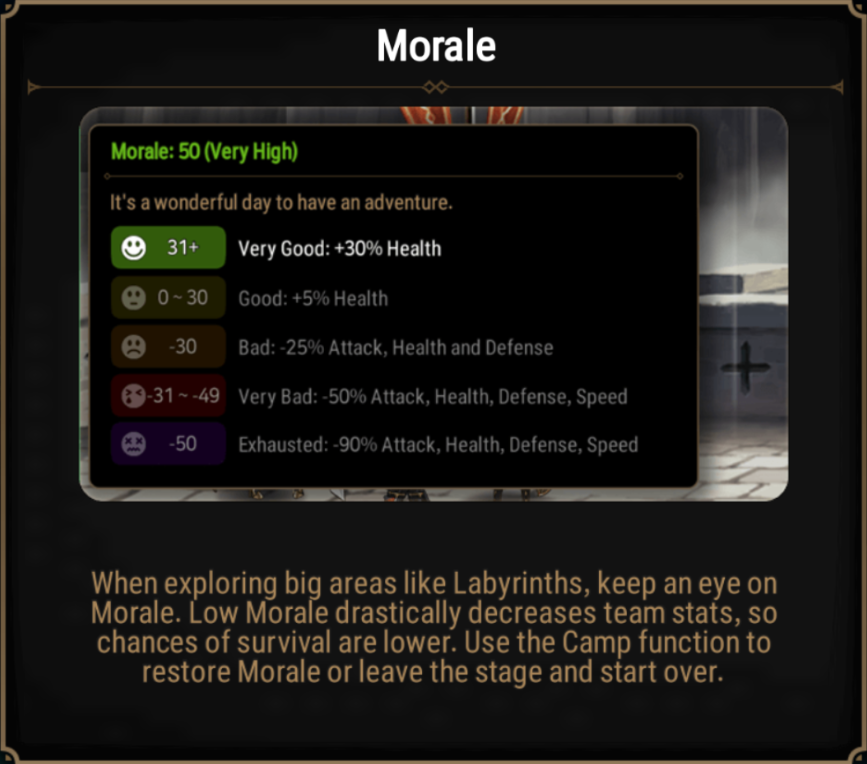 Exploring the maze needs careful planning and strategy. You must calculate the best possible route that you can clear with the existing morale to be able to clean the rest of the area in the least number of attempts. Each door in the Labyrinth is a real control point that can be reached automatically by spending 3 morals. This means that you do not need to clear the path you have already cleared because you can move at each control point at your will at any time. Each maze zone has at least 1 gold chest containing premium equipment, so be sure to check all the rooms in each maze zone. Like adventure maps, maze areas also have 3 tasks available that must be done to acquire additional old coins (currency needed to exchange several items). After beating Zone Boss and arriving at Chaos Gate, you can move to the next area of ​​Labyrinth. My advice is to clean each zone 100% before moving on to the next zone because the Labyrinth monsters have a high probability of releasing high quality equipment and the Labyrinth's progression is needed for its reputation. 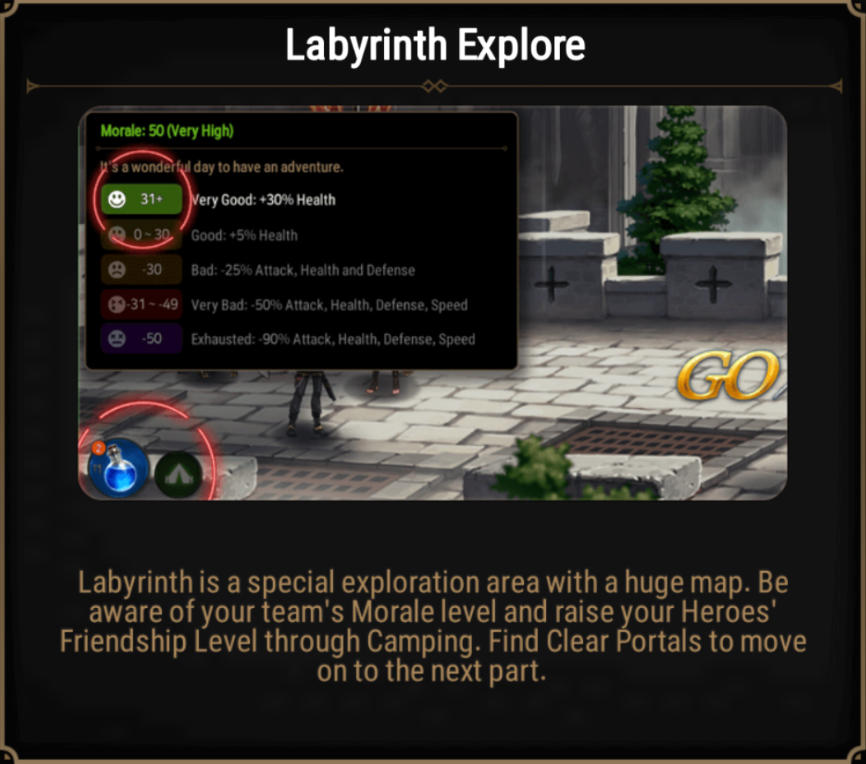 Every day you get 1 Labyrinth attempt but you cannot accumulate more than 3 attempts at the same time, which means that you must participate in Labyrinth regularly to avoid wasting attempts.

At the end of Chapter 6.1. you can enter Challenges through the Battle Menu. In the challenges, you must choose one of the existing adversaries and try to defeat it to obtain several rewards (equipment, amulets, etc.). Each adversary has different levels of difficulty that provide better rewards for beating tougher opponents. The challenges are like events and change over time. To participate in the challenges, you will have to spend energy depending on the difficulty level of the adversary. The challenges can be very demanding if you don't have a strong team, so you'll have to be patient before you can regularly claim the awards of the challenges.

This concludes the basic information about the Battle function that brings us the following important function of Epic Seven -Summon. You can read more about Summon and the rest of the Epic Seven features in Epic Seven Beginners Guide Part III.

You can find detailed information about all the heroes and their value in the game in our Epic Seven Level List.

I hope you enjoyed the Epic Seven Beginner's Guide and now fully understand all segments of the Epic Seven game. BlueMoonGame wishes you a long and prosperous journey to a wonderful world known as Epic Seven.